Sports Equipment Workshop B. Kolb And Store B. Kolb & Predalič 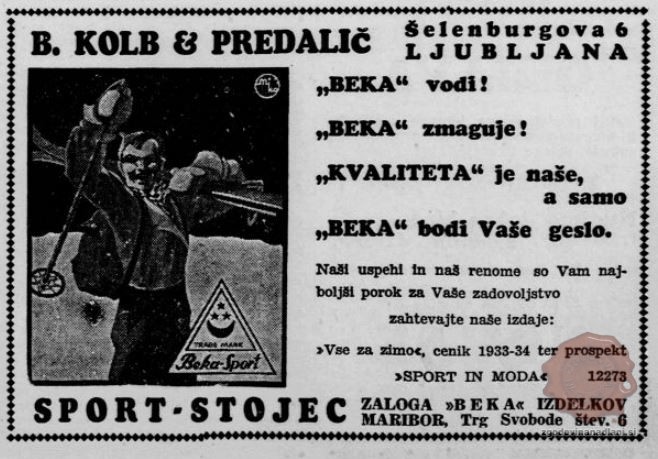 In the period between the two world wars, a successful sports store B. Kolb & Predalič operated in Ljubljana, which upgraded the work of the sports workshop B. Kolb.

Modern sport, as the innovation of the 19th century, appeared on Slove¬nian territory in the form of gymnastic, rifle and alpine associations and cycling clubs. At the beginning of the 20th century various other sports clubs appeared. For their activities, these associations needed suitable equipment and tools and these were in majority provided by foreign companies and some small domes¬tic manufacturers. During the period between both world wars, when in the new Yugoslav state sport flourished, domestic sports manufacture, trade and industry also prospered. Several successful companies, which covered the most popular and developed sports disciplines in the Slovene body culture - gymnas¬tics and skiing, were established.

One of them was the Sports workshop B. Kolb, established in 1930 in Vižmarje by Albin Kolb. It specialized in the manufactur¬ing of skis, tents, sleighs and kayaks and quickly established an internationally recognized brand Beka. In 1932, Kolb, together with his business partner Stane Predalič, expanded his business and opened a store with sports equipment B. Kolb & Predalič in the center of Ljubljana. The store developed successfully and soon became a meeting point for several sports clubs and unions, which was mostly due to the fact that both owners were actively involved sportsmen.

Kolb and Predalič were the founding members of the Ljubljana Kayak Club and the Turist club Skala, both members of Sokol and the alpine association. Before and after the war, Predalič was active in skiing as an instructor, judge, delegate and head of competitions, while Kolb won the third place in kayaking on the first home championship in 1933. Kolb died in 1944, shot as a hostage by the oc-cupier forces for being a part of the Liberation Front. After the war, in 1948, the store and the workshop were nationalized and made a part of the very success¬ful factory Planica-Šport, which continued Kolb’s legacy.

*The article is a summary of an original article published in a journal Arhivi, št. 1, 2020.

This website uses cookies to improve your experience while you navigate through the website. Out of these, the cookies that are categorized as necessary are stored on your browser as they are essential for the working of basic functionalities of the website. We also use third-party cookies that help us analyze and understand how you use this website. These cookies will be stored in your browser only with your consent. You also have the option to opt-out of these cookies. But opting out of some of these cookies may affect your browsing experience.
Necessary Vedno omogočeno
Necessary cookies are absolutely essential for the website to function properly. This category only includes cookies that ensures basic functionalities and security features of the website. These cookies do not store any personal information.
Non-necessary
Any cookies that may not be particularly necessary for the website to function and is used specifically to collect user personal data via analytics, ads, other embedded contents are termed as non-necessary cookies. It is mandatory to procure user consent prior to running these cookies on your website.
SAVE & ACCEPT